At Current 2022 the audience was given the option to submit ratings. Here’s some analysis I’ve done on the raw data. It’s interesting to poke about it, and it also gave me an excuse to try using DuckDB in a notebook!

When you’ve got a hammer, everything looks like a nail ;-)

DuckDB has kinda caught my imagination with the idea that it’s embedded and so easy to unleash really powerful SQL support on any unsuspecting data that passes its way.

I like the concept of using notebooks because you can show all your working and thought process. I wanted somewhere to work with the raw data, which was either going to be Google Sheets or Excel probably – or something with SQL. The advantage of not using Google Sheets is that I have a step-by-step illustration of how I’ve gone about wrangling the data which makes my life easier next time. It’s also a fun way to explore and show-off some of the things you can do with DuckDB via Jupyter :)

You can check out the raw notebook here. The rest of this blog is basically written from it :)

On my local machine I used Docker to run the notebook:

Everything else quoted here is what I ran directly in the notebook itself. To start with I installed the dependencies that I’d need (based on the DuckDB docs):

Some config and stuff:

Now connect to an instance of DuckDB. You can use it in-memory (%sql duckdb:///:memory:) but I wanted to persist the data that I was loading and working with so specified a path that was mounted in the Docker container to my local machine:

Now let’s see what the schema looks like. It’s automagically derived from the CSV column headings and field values.

Let’s wrangle the data a bit.

It’d be nice to get the Start Time as a timestamp (currently a VARCHAR). Everything else looks OK from a data type point of view.

We’ll also drop some fields that we don’t need or want. For example, we don’t want sensitive information like the names of the people who left the ratings.

Converting the VARCHAR timestamp field to a real TIMESTAMP

Before going ahead with the transform let’s just do a dry-run to make sure we’ve got our format string correct. (I just noticed on that page too that I could have specified this at the point at which the CSV file was read)

Ratings are left by different types of attendee

The system categorised attendees not only as in-person or virtual, but also based on whether they were sponsors, etc.

1. Was there a noticable difference between ratings given by virtual attendees vs in-person?

A median score of 5 out of 5 tells us that the ratings were high across the board - but hides the nuances of the data. We could apply further percentile functions, but this is where visualisation comes into its own.

Using bokeh and altair for visualisation

Load the ratings data into a dataframe for visualising

Use bokeh to plot the ratings, by rating type and attendee type 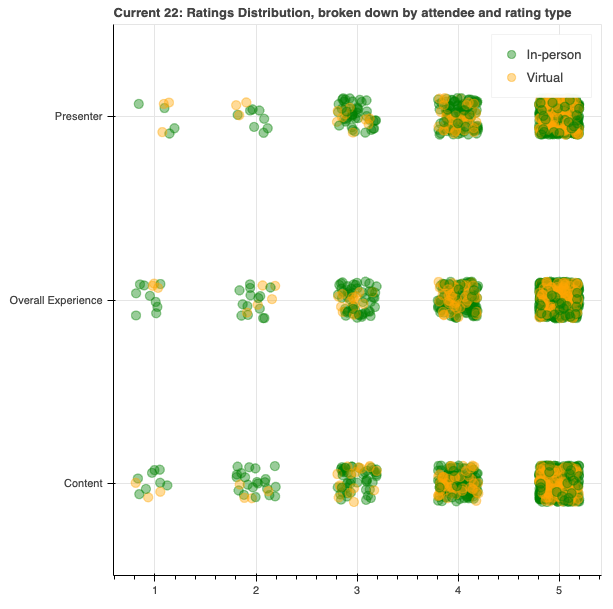 This shows us that the concentration of the ratings were certainly favourable. Let’s take another angle on it and use a histogram instead of scatterplot. For this I switched to altair because it supports the aggregation of data (using count()) which I’d need to figure out how to do otherwise with the dataframe - and that’s one step of yak-shaving too far for today…

This is OK, but it’s the absolute values, of which there are disproportionally more for in-person than virtual. Can we plot the values as a percentage instead? I hit the extent of my altair understanding here (I think transform_joinaggregate might have helped but I got impatient), so resorted to SQL to help instead.

DuckDB supports window functions (and has a rather good docs page to explain some of the concepts). I needed the total number of ratings by attendee_type so that I could work out the percentage of each of the counts, and this is what sum(count(*)) over (partition by attendee_type) gave me. First, I’ll check the numbers that I’m expected;

and then use the window function with the above numbers to check that it’s what I’m expecting.

Let’s plot the data with altair and facet the charts for ease of readability:

Across all three ratings categories, there is a marginal but present difference between how in-person attendees and virtual attendees rated sessions. Those in-person were more likely to rate a session 5 whilst those attending virtually did predominantly rate sessions 5 but if not 5 then more often 4 than those in person.

Analysis: Did Ratings vary of the course of the Day?

Probably not a very scientific study, but with 7+ tracks of content and two days’ worth of samples, here’s how it looks if we take an average of the rating per timeslot:

It’s not a great plot because the data is lumpy; some sessions were 45 minutes and other 10 minutes. Let’s see if the range framing in DuckDB will help us here to smooth it out a bit with a rolling hourly average:

That’s much better. It also shows the scale isn’t so useful, so let’s adjust that

Let’s have a look at the second point here and see if we can figure out what’s going on.

Here’s the fun thing about conference feedback: it’s patchy, it’s completely subjective - and it’s often contradictory. These are comments for the same session - one person loved it, the other thought it shouldn’t have even been on the agenda. Whaddya gonna do? ¯\_(ツ)_/¯