I’m convinced that a developer advocate can be effective remotely. As a profession, we’ve all spent two years figuring out how to do just that. Some of it worked out great. Some of it, less so.

I made the decision during COVID to stop travelling as part of my role as a developer advocate. In this article, I talk about my experience with different areas of advocacy done remotely.

This is the obvious one: do what you did before (conferences) but from home…

I’ve written before about virtual conferences, so I shan’t rehash it here. Short to say, as a speaker, I’ve had my fill of talking to a faceless webcam, and I’m pretty sure as attendees most people are quite content to watch a video on YouTube at a later date than attending an online event that is almost, but not quite, entirely unlike an actual conference.

Just as the vacuum cleaner is known by most as a Hoover, the same for video platforms on which we disseminate material for developers. It’s YouTube, and there’s no point beating around that bush. TikTok et al are a different beast, and I’m not considering those here.

Many developer advocates, myself included, took to YouTube at the beginning of the pandemic. It was an obvious outlet - if we couldn’t be on stage, then damnit, we’d get ourselves in front of a camera.

My experience with YouTube started from knowing nothing about it, nothing about making videos, nada. After a while (and with some great advice along the way from my friends and former colleagues @gAmUssA @tlberglund) I got to the point of being able to make a passingly competent amateur YouTube video. I really enjoyed it—and I reached a bunch of developers in the process!

There have been one hundred and sixty five THOUSAND views of my videos, adding up to 14.2k hours (over 1.6 YEARS) watched :-) That is not to sound conceited, but to emphasise the point that if someone like me—with a face made for radio and video editing skills to match—can reach developers in that way, then any developer advocate can.

Another neat thing about YouTube is that it has a long tail for anything still relevant. You can see that the views per month goes up and up until the last time I published a video—but they don’t go down after that and just plateau—that is, there are still around 8 thousand views of my videos per month, even now.

I made many of these videos months (if not years) ago, but they’re still getting thousands of views. It’s true to an extent for any content published online—but YouTube’s automagic algorithm I think must do more to boost continued traffic to it than would be got by, say, a blog sitting on a dusty corner of the internet.

One of the patterns that I found most successful and rewarding as an author was to pair a blog with a video. I’d research the subject, write up a demo script, record it, and then publish all of it. That way folk who like video can watch video, and those who prefer to read and/or want to try out the code shown can also do so. I used GitHub to host all the code samples. You can see the published results here 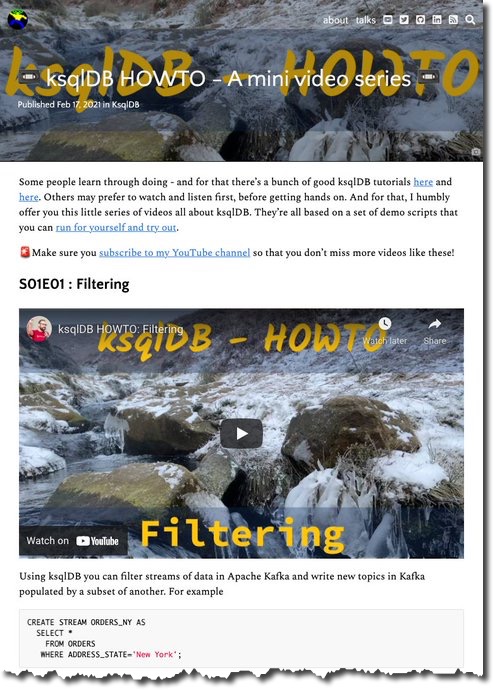 I also learnt plenty about recording and editing video. Screenflow did the job well and its learning curve was ok for time invested. A decent camera and lighting helps too…

You can read more about my YouTube journey in this short talk.

Blogging was always there for us when we were off the road, and it’s still here for us now. Whilst some developers learn through watching (like with YouTube, above), others learn through reading. A well-written blog can be the kind of material with a long, long tail. It can promote an idea, it can solve a specific problem, or illustrate a fun idea. I’ve always loved blog writing, and still do.

Meeting developers where they are online

If you’re not at conferences, meetups, or customer site visits, how do you know what developers are doing? How can you advocate for developers and not just to them? The value of a developer advocate to an organisation is not just the outbound advocacy but the inbound. The bug reports, the "this damn sharp edge catches me out every time", the "I was trying to build this thing with your product" stories. If you’re face to face with developers you can’t help but have these conversations. If you’re not travelling, then you have to find that elsewhere.

Thankfully in this day and age, the internet is pretty much ubiquitous amongst developers. Getting answers from StackOverflow is second nature to many. Taking to Twitter to chat and shitpost is standard. And amongst the shitposting and noise are golden nuggets of information. Conversations to spark up. Ideas to pursue.

Something I’ve done whilst at Confluent is help launch a Discourse-based forum to complement the existing Slack workspace that we have. With these two platforms I can listen to and help potentially tens of thousands of developers.

As well as on our community platforms, I’ve had a lot of great interactions on StackOverflow, Twitter, and Reddit. Find out where your communities hang out, and go to them. A community platform that you curate and run is a nice space that’s familar and important to have, but remember that developers may not take the time to look for your platform. General tech platforms like StackOverflow (and appropriate subreddits) are where devs also head, and if you don’t participate in those then you’re ignoring part of your audience.

I see several concrete results and benefits from interacting with the online community:

The team I’m part of is called DevX, or Developer Experience. It broadly encompasses all the usual DevRel areas you’d expect, but its name also suggests a crucial part of what a developer advocate can provide. Just as the interface on a web app will be designed and refined by the UX (User Experience) team, a developer’s interactions with software, its APIs, and its documentation falls broadly under the "Developer Experience".

Developer Advocates are well placed to be a key resource for improving developer experience, because they are developers, and part of their job is communicating. A good developer advocate should be able to not only identify a friction point but articulate how a developer would expect it to behave, and communicate clearly how to do this. That could be an API in the software, an error message, a tutorial, or anything else that developers interface with.

This in particular has been a large part of my role in recent months, with a focus on Confluent Developer - helping make it a resource that developers want to use.

Not speaking at them, but helping organise them. Just as a developer advocate represents the voice of the developer back to departments, including product and engineering, they can also speak well for developers when it comes to organising conferences and selecting their programs.

I’ve had the honour this year of chairing the Kafka Summit London 2022 program committee, and it has been hugely rewarding. Being able to influence the program and help draw in talks from the community has been great, and I can’t wait for the conference itself later this month. And yes, I’ll be travelling to that :)

In recent times I’ve noticed an increase in the Engineer job title in the DevRel space (DevEx Engineer for example), and it usefully captures a huge part of what some DevRel folk do. Behind many brilliant talks lies some great code that enabled that demo. Supporting many a successful implementation of your product may be a library or set of hacks.

Creating demos, writing the "sticky tape" scripts and examples—these are great examples of DevRel engineering. In many cases it will be the person doing the talk that wrote the demo, that spun out script from another talk into its own github repo. But there are plenty of cases where the engineer and advocate can work collaboratively for efficiency and scale.

So…Are You Saying That Travel Is Redundant in Developer Advocacy?

Humans crave face-to-face interactions. Virtual conferences will never come close to replicating that. The in-person conference will always be a thing, and developer advocates can play an important role in bringing new technologies and ideas to developers at these conferences—and feeding back conversations and ideas from them to their company.

My thesis is that you don’t have to travel. It is not that you shouldn’t travel.

This is also on a personal level. Can I, as a developer advocate having chosen to stop travelling, still be effective? Yes, I think so. Can a company’s entire DevRel efforts be done virtually as effectively as they might be with a proportion of travel involved? I would say not.