Continuing in the beard-scratching theme of Unix related posts (previously - awk), here’s a way to graph out the I/O profile of your Oracle database via the Oracle metrics in gv$sysstat, and gnuplot. This is only the system I/O as observed by Oracle, so for belts & braces (or to placate a cynical sysadmin ;-)) you may want to cross-reference it with something like sar.

First, a pretty picture of what you can get: 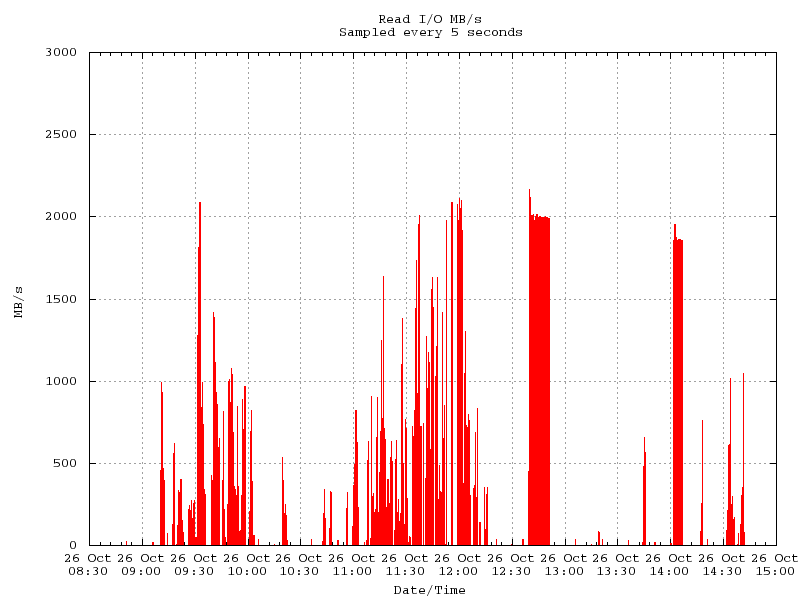 Why would you want to do this when you’ve got a pretty GUI in EM/Grid and flash graphs? Because the data in EM is averaged out over a relatively large sample (one minute for recent history, and whatever your AWR samplerate is for older history) and thus lower than the point-in-time I/O being driven through your server. My previous post (The danger of averages) illustrates this. For identifying bottlenecks or capacity planning, you need to know how much I/O throughput you really use. Consider this rough example: Using V$SYSMETRIC_HISTORY you can get an average over the last minute. For the first 30 seconds of this sampled minute you ran a query consuming I/O at 100 MB/s. For the last 30 seconds there was no system activity. V$SYSMETRIC_HISTORY shows a figure of 50 MB/s, as this is the average over a minute. You look at your system’s IO profile in EM and see 50 MB/s. Your hardware guys tell you that the system has a capacity of 100 MB/s throughput, so you think you’re well in the clear for capacity, when in reality you’re already hitting it. Now, what happens when two instances of this same query - each requiring 100 MB/s - runs? It will take twice as long when run concurrently (because they’ll have to share the throughput available, and thus get ~50 MB/s). It might be that this is acceptable, that the trade-off of hardware cost to increase I/O throughput capacity isn’t justifiable for making the queries run faster. But it’s important to be aware of the bottlenecks in a system so that they can be mitigated and considered in any capacity planning.

So, anyway, back to the point of this post:

Kevin Closson’s written a neat script here which will write out IO metrics from gv$sysstat to a flat file on the Oracle host. It looks like this:

I wanted a quick way to visualise the data, and also to plot it out once it was over the number of rows that Excel will chart at once (32k I think). gnuplot was the answer, but it’s a bit of a sod to get running as a fire-and-forget so here’s a help. Here’s how it works:

This was written on cygwin, and presumably should work on any ’nix system.

Ob. OBIEE: An alternative to gnuplot would be to graph the data in OBIEE using the text file as source data to a hacked together RPD :-) : 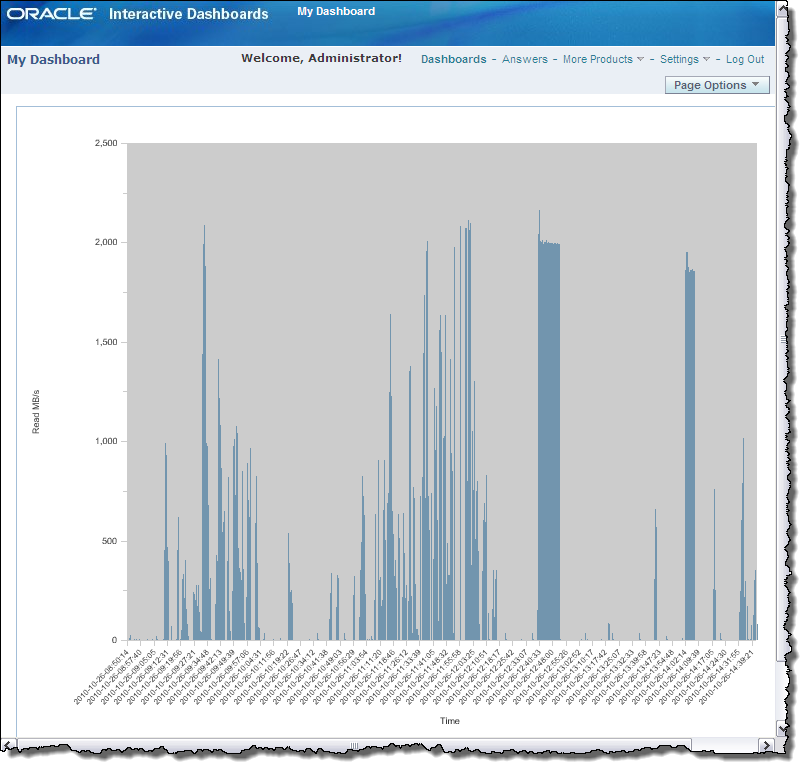