Over the years I’ve used various blogging platforms; after a brief dalliance with Blogger I started for real with the near-inevitable Wordpress.com. From there I decided it would be fun to self-host using Ghost, and then almost exactly two years ago to the day decided it definitely was not fun to spend time patching and upgrading my blog platform instead of writing blog articles, so headed over to my current platform of choice: Hugo hosted on GitHub pages. This has worked extremely well for me during that time, doing everything I want from it until recently.

As a static-site generator, Hugo supports the idea of future-dated posts, but you still need to regenerate that static site once the date has arrived. It’s not the same as serving dynamic content on a blog in which you simply say IF blogDate ⇒ NOW(). With a static site you publish content by building it and pushing those static files to the server (GitHub Pages in my case) - and if you’ve published content that’s future dated, you need to find a way to trigger that publishing process.

I recently undertook a little project to create and publish twelve videos in the run-up to Christmas; three of them were to be published after I’d hung up my laptop for the year and would be comfortably ensconced on a sofa and up to my ears in Quality Street and mince pies. Whilst there were plenty of tools to publish tweets on a schedule, and YouTube can schedule the publication of a video, my blog (from which the videos were linked) looked like it was going to be a bit of a problem. A bash while loop running on my laptop, or even a crontab, seemed a bit hacky and ultimately not reliable enough.

The answer turned out to be this thing called GitHub Actions which, like a lot of technology these days, I’d heard of and was vaguely aware of—but had no idea what it actually did.

GitHub Actions lets you take actions (duh!) based on the code in your repo on GitHub. Since my blog is just a repo, it can be set to trigger an action every time I push a new article to it (like this one), or indeed on a schedule also.

I found a few articles to use, primarily this nice one from Gunnar Morling.

See my previous article for details of how I’ve installed and configured Hugo.

I’ve seen tutorials do this with both SSH keypairs, and with GitHub Personal Access Tokens. Based on Gunnar’s article, I used the SSH keypair approach, generating a unique pair just for this purpose:

In the repository secret for your source repository (so https://github.com/rmoff/rmoff-blog/ in my case) put the private half of the key (if you use the above command it’ll be called gh-pages). Give it a name and make a note of that name. I used ACTIONS_DEPLOY_KEY. 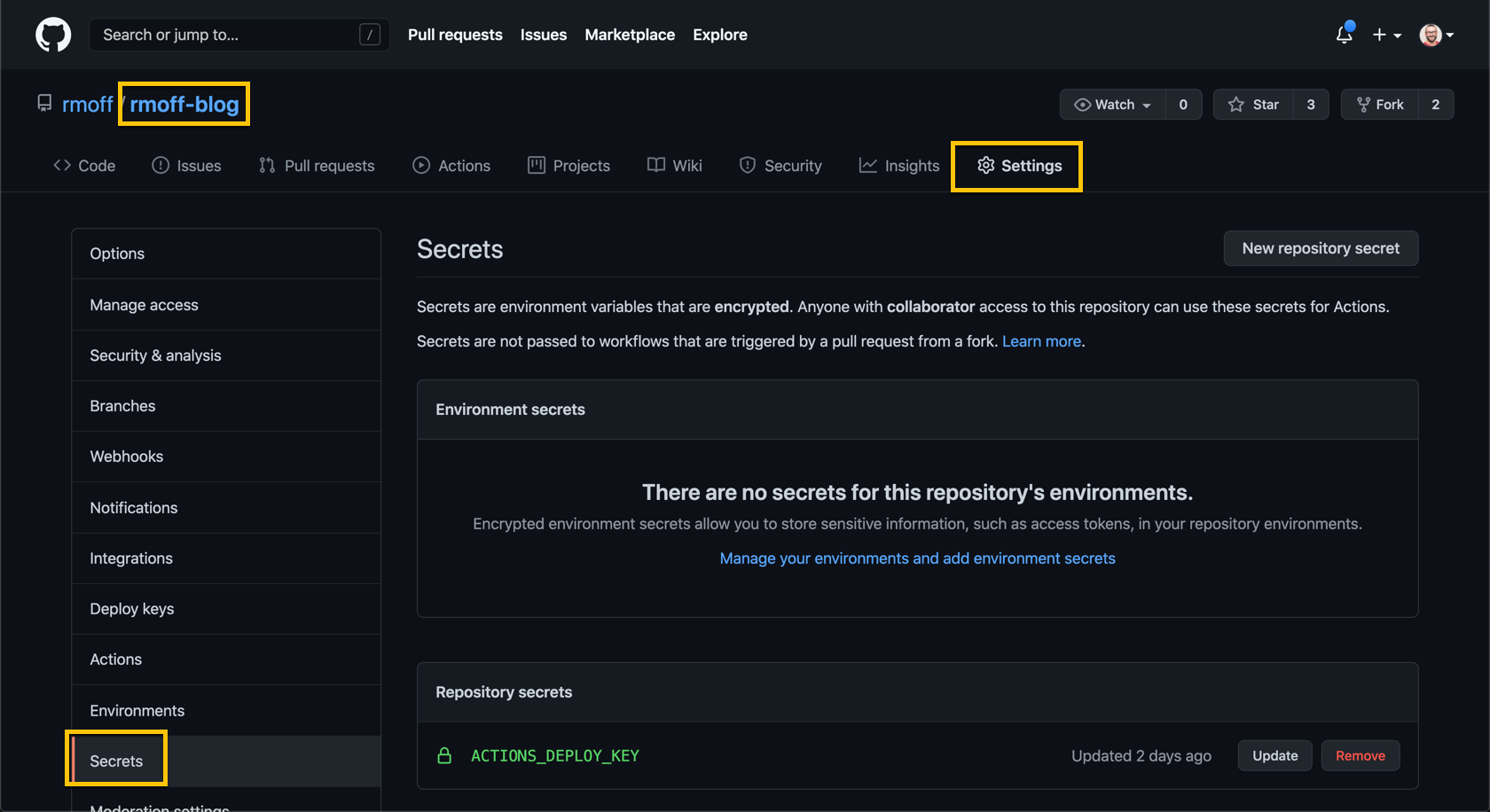 The deploy key is configured against the repository to which your Action is going to push the static site content, which is https://github.com/rmoff/rmoff.github.io in my case. If you are using SSH keys then it is the public part of your keypair that you generated, and using the above code will be called gh-pages.pub. 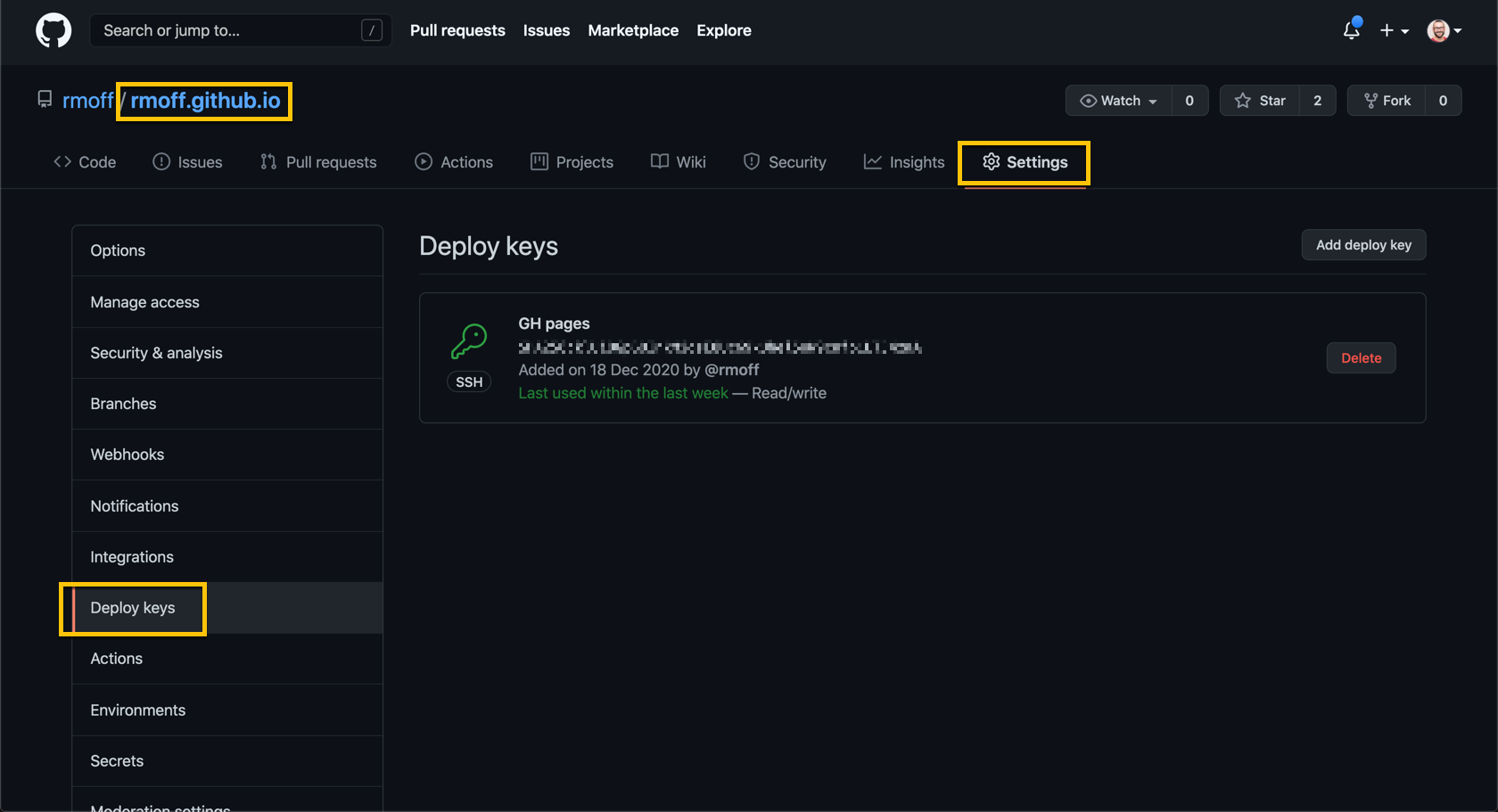 Once you’ve set up the auth per above, you need to configure the action itself. This is done through a YAML file that you put in the source repository from which you want it to run. Mine is based heavily on the one in Gunnar’s article, with a few tweaks.

The only issue I had was to do with my theme, and some dodgy include directives that I’d set up. I ended up ditching the theme that I use as a submodule and just including it in my site code. Dirty, but it works, and the theme isn’t actively developed any more, so ¯_(ツ)_/¯

That’s pretty much it. The build chugs away every few minutes, meaning that posts that I’ve written that are future dated will hopefully publish just fine when their time comes around.

Gunnar noted that he’s evolved his build from what he originally published, as well as setting up preview builds for PRs which is a neat idea.

Also got my preview flow properly set up now. Proper base URL, and e.g. Disqus disabled on staging (via Hugo environments). Also considering to add noindex metadata, but probably not worth it, as those previews are rather short-lived. https://t.co/KdPxlrk1E4.