Markdown is a plain-text formatting syntax. It enables you write documents in plain text, readable by others in plain text, and optionally rendered into nicely formatted PDF, HTML, DOCX etc.

It’s used widely in software documentation, particularly open-source, because it enables richer formatting than plain-text alone, but without constraining authors or readers to a given software platform.

Platforms such as github natively support Markdown rendering - so you write your README etc in markdown, and when viewed on github it is automagically rendered - without you needing to actually do anything.

I’ve used Markdown for years now, after being introduced to it at my previous company. When I worked as a consultant I would be delivering client reports, and I wrote all of them in Markdown. The final delivered copy was in DOCX or maybe HTML - but the master copy remained as Markdown.

How Do I Write Markdown?

One of the cool things about Markdown is that it is widely supported. For example, if you’re using github (or gist), any file with a .md extension automagically gets rendered as Markdown, thus:

How Do I Write Markdown? What Tools Do I Need?

Markdown is plain text. ANY plain text editor can be used to write Markdown. That’s why it’s so awesome - it is completely portable. TextWrangler, FoldingText, TextEdit, Notepad, Notepad++, Ultraedit… take your pick

There’s a comprehensive reference guide here that guides you through the syntax.

But, there are other tools that can make your Markdown life even better, such as previewers.

The best of these by a mile on the Mac is Marked2. It gives you a nice rendering of any markdown document that you’re working on. Used with the El Capitan split-screen it’s pretty-near perfect way to write Markdown. 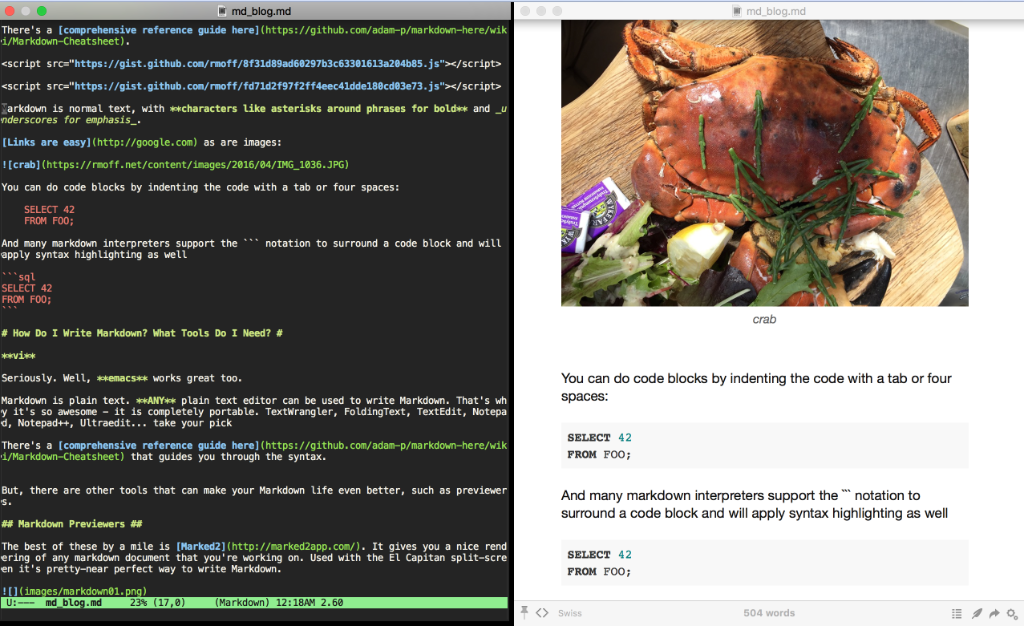 Ways to Generate Output from Markdown