In the following list, which two mind-mapping programs are rated best? 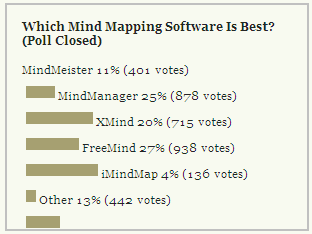 Now look at the actual numbers, and answer again

I can’t be the only one in this frantic world whose eyes are drawn to the pictures instead of words and leap to conclusions. It’s only because I use FreeMind and was surprised it scored so low …. and then realised it hadn’t. Looks like the HTML rendering isn’t the same here (FF3.6) as when the web page author wrote it.

This is a good example of how pictures can be so much more powerful than numbers alone, so long as you’re drawing the viewers eyes to the correct numbers!